An interesting article recently published in the well known ECD Solutions Electrical magazine outlining the lower level of understanding of LED Technology by the very people who install the light fittings - What does this mean for you - the end consumer?

In February, Zissis, who has a particular expertise in application of LEDs for street lighting, delivered seminars to over 360 lighting and other professionals in Sydney, Melbourne and Brisbane. The seminars were part of Lighting Council Australia’s LED seminar series and came at a particularly important time for lighting when cities, municipalities and utilities around the world are moving, or contemplating the move, to LED street lighting.

Zissis’ presentation also went on to document some of the issues and problems with the technology. These include:

Another significant issue is poor understanding of LED technology by installers. In a recent survey of European installers, the following extraordinary results came from a question on the effects on LEDs of increasing ambient temperature (bear in mind that heat is often described as the number one enemy of solid-state lighting):

It is doubtful whether these results would be much different in Australia.

Energy consumption during operation is considered by Professor Zissis to be by far the most important environmental indicator of light sources. By this measure LEDs perform well. 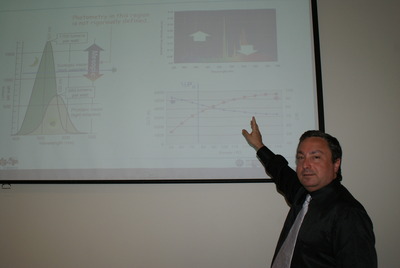 In the second seminar of the series, Professor Zissis examined the current status of street lighting. He spoke of the ‘Grenelle I’ (2009) and ‘Grenelle II’ (2010) French laws which had the following aims:

The legislation has resulted in a saving of 19.55 GWh spread across 2131 small French communities with a total population of 1.7 million inhabitants.

Among the conclusions of the street lighting seminar is the need to take a holistic approach to energy savings. Factors including mesopic vision, lamp technology, intelligent control and fixtures all need to be considered.

Induction lighting was considered a particular problem unless adequately shielded because of its potential to cause electromagnetic interference.

Professor Zissis questions whether LEDs are ready for road lighting (as opposed to the less demanding requirements of street and other public lighting). In a 2011 experiment, only one supplier’s product was deemed to meet all requirements (which included illuminance levels, light uniformity and energy efficiency, among others).

Zissis is qualified to speak on the subject of solid-state lighting. He is head of the Light and Matter Research Group at LaPlaCE (Laboratoire Plasma et Conversion d’Énergie) at the University of Toulouse, France, and is a world-renowned expert in lighting systems research and design. In addition, Professor Zissis is Task 1 Leader of the International Energy Agency’s 4E SSL Annex. Under his leadership, the IEA has published performance tiers for a range of applications. The SSL Annex was established in 2009 under the framework of the International Energy Agency’s Efficient Electrical End-Use Equipment (4E) Implementing Agreement to provide advice to its 10 member countries – one of which is Australia – seeking to implement quality assurance programs for SSL lighting. The goal of this work is to reduce the risk in using SSL products and to provide governments and consumers with recommendations they can trust when investing in SSL products. The performance tiers identify a suite of metrics and values related to minimum performance values of SSL for energy efficiency, lighting quality and safety.